“I was blown away by the Petronas Towers! ”  the first thing in my mind when I saw the most famous tower in Asia. We left Manila around past 2 in the afternoon via Cebupacific, it was a less than 4 hours ride from MNL-KLM plus the almost 2 hours waiting at the airport, I didn’t sleep during the whole flight since I am so excited to arrive in one of the most beautiful country in Asia, rich in Culture, with mixed races. While on the plane, i was thinking what we should actually do once we landed, i have my itineraries but of course unplanned moments are the best! We landed Kuala Lumpur International Airport 2 (KLIA 2)  around past 5 in the afternoon.

Little did we know that KLIA 2 is quite far from the City Centre itself or usually known as Kuala Lumpur Centre, so we took a metered-taxi which is quite expensive but more convenient ( I believe )  because if were gonna take a bus we have to take 2 to 3 rides from the airport, I don’t have any idea that Kuala Lumpur Airport Express exists, where you can go straight from KLIA 2 to KL Central!!! ( how stupid I am not to do an extended research? ). forgive me for that.

Anyways, the cab was very comfy since the cab driver is nice and also gave as a glimpse of Malaysia while on the road (instant tour guide!) , we went straight to our Hotel  (Container Hotel) which is actually located near the Petronas/KLCC  tower about 7-10 minutes ride only, we payed 70RM. i have noticed that in Malaysia they have 2 kinds of cab, (1) is the RED taxi = flat rate 3RM; (2) is the BLUE taxi = flat rate 6RM. We had a dinner not too far away from our place which only costs us more/less 15RM, there are a lot of fancy restaurants around our hotel, mostly Indian and Chinese food.

Right after dinner, we went straight to Petronas Towers also known as the Petronas Twin Towers are twin skyscrapers in Kuala Lumpur, Malaysia. it is 452m in height and was opened last March 1, 1996, it is located in the heart of Malaysia and towering all over the City so it very easy to find. The lights are such a beauty, i took a few minutes to take it all in and took some photos for a souvenir. They are open from 9am to 9pm, and if you are planning to go inside you have to be an early bird and fall in line outside of the tower to buy a ticket and enjoy the view when you’re inside it. We haven’t got the chance to go inside since we are only spending a day in Malaysia. 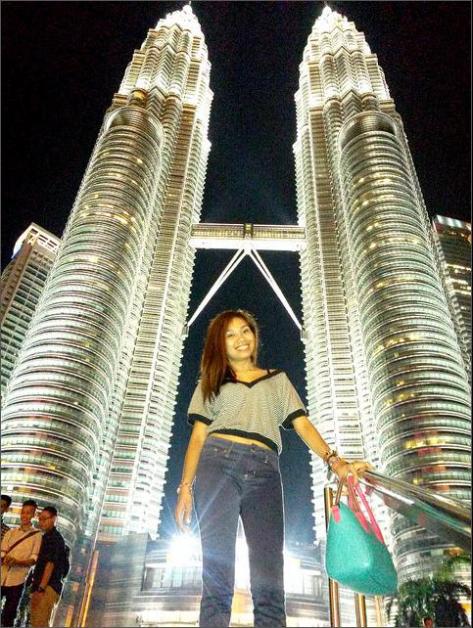 pardon for my face, i look so fat here, and i didn’t bring my camera either, only used my phones camera. *sorry

( I have notices a secret, if you are a keen observer you around the flashy lights of the twin towers there are flying moth/butterflies, and guess what they are big moths! and they look so lovely) 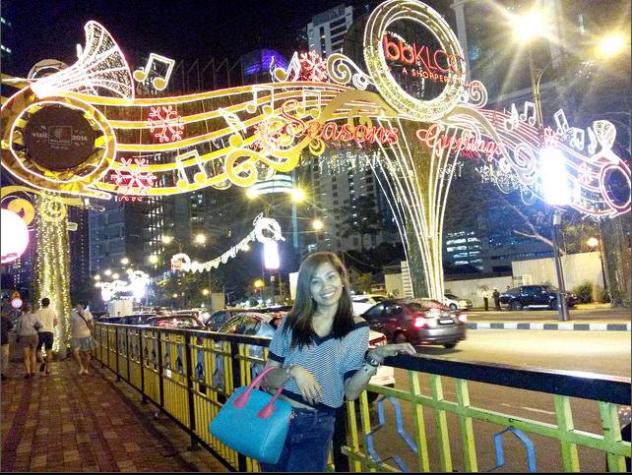 (this photo was taken outside of the KLCC Shopping Centre, they call it shopping haven, just on the right side of the Petronas Towers)

The next Day, our  Day 2 in Malaysia – We woke up so early and decided to visit the famous Batu Caves, they say that you’ve never been to KL if you didn’t visit Batu Caves. Batu Caves is a limestone hill that has a series of caves and cave temples in the Gombak district, 13 kilometres north of Kuala Lumpur, Malaysia. It takes its name from the Sungai Batu or Batu River, which flows past the hill. 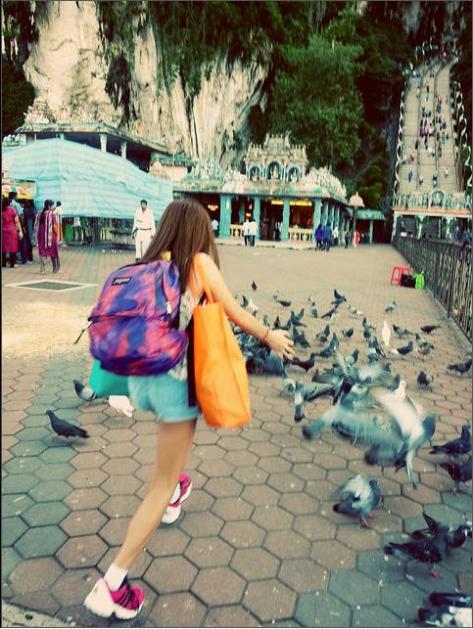 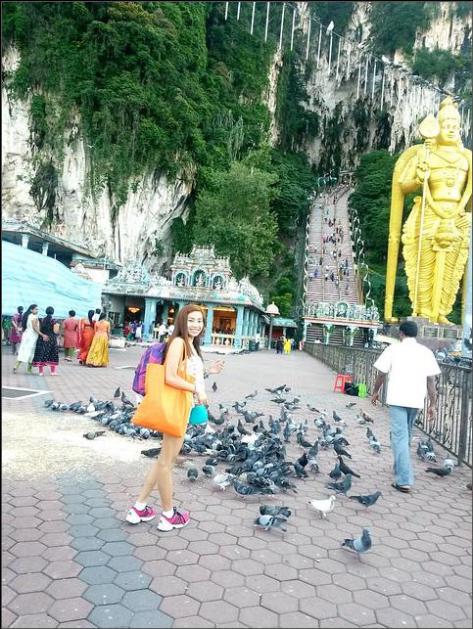 (it was smelly here but glad i have a good shot with the birds!) 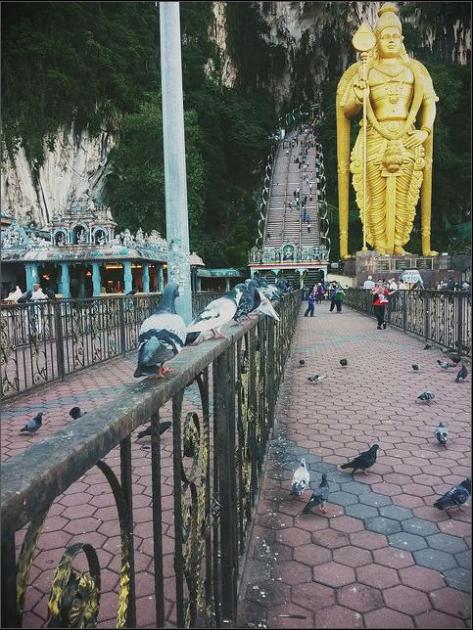 ( look at the bird lining up! so cuuuute!)

It was so tiring but fulfilling, I have met a lot of people along the way, different races, different religions, different beliefs, different way of living, a lot it Indians I have met too, and now I have deeply understood their culture more.  If you’re planning to visit Malaysia, do not forget to Visit Batu Caves; the hotel is kind enough to get us a taxi and its 30-45 minutes from City Centre and only costs 25RM, you can also take the Kommuter Train from KL Sentral to Batu Cave.

(at the foot of Batu Cave, you will easily spot small temples and Indian people worshiping) 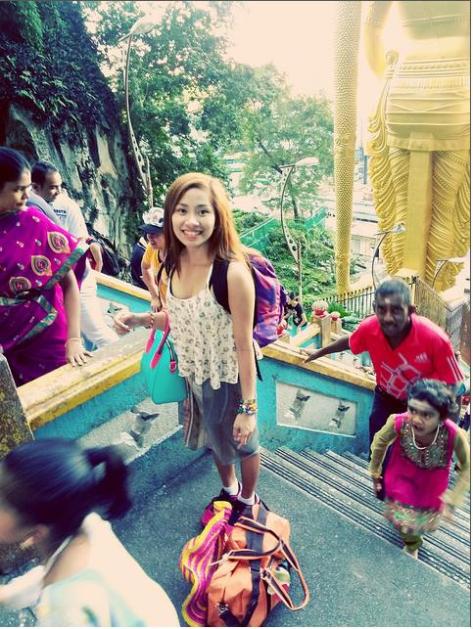 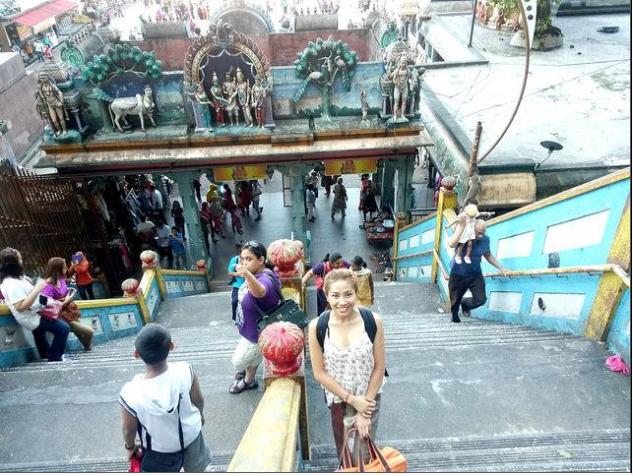 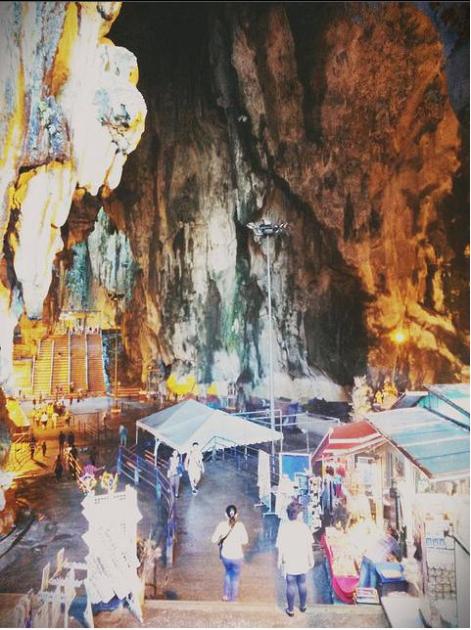 (outside of the cave, you can have a peek of what’s inside, you can also buy your souvenirs here for a lower price)

now, whats inside the cave? 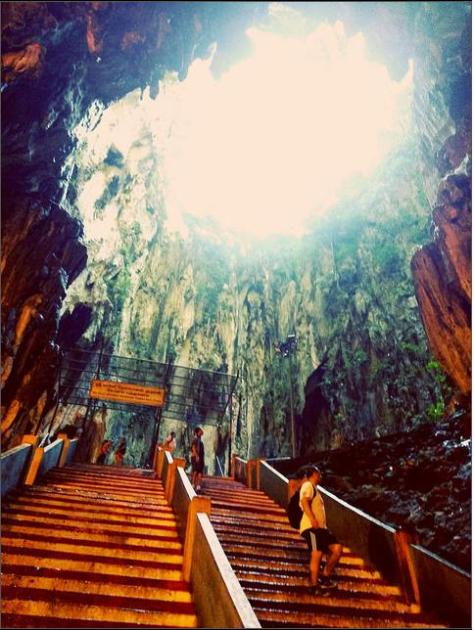 ( I really find this photo a beauty, it expresses a thousand words, midst darkness there is light!)

(during Saturdays and Sundays, Indian people usually gather together to worship and to eat together and a have a little catch-up as well)

( I also tried their henna tattoo,  it’s usually an Indian Bride’s way of grooming for the Wedding Ceremony)

(on our way to the train station, we pass by this beautiful little temple) 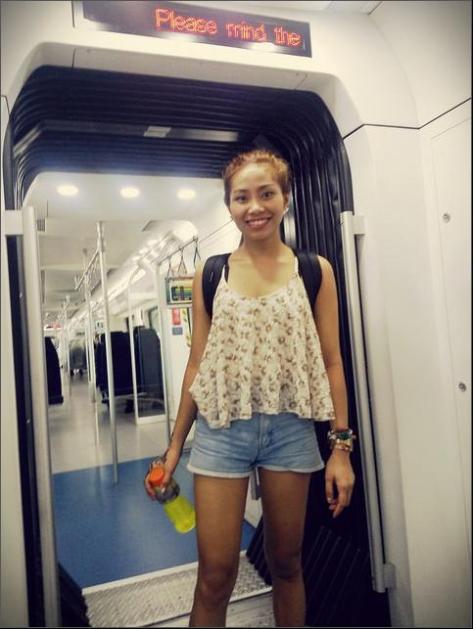 (and lastly, who would’ve miss taking a photo inside their train station!)

It was indeed a short but wonderful trip! I have learned to be more patient, to be more kind, to understand other cultures and beliefs apart from my own, and the most important thing is I have enjoyed this quick tour around Kuala Lumpur. I know that there’s a lot more to visit in KL and this is just 2 of the most amazing place to visit in Malaysia, but I didn’t have any regrets since Penang also gave me a different perspective about Malaysia.  Its indeed another one-of-a kind trip that i will cherish forever, another thing is crossed-out off my bucket list. Now I can say that  “Malaysia is truly Asia!!! ”

From Batu Caves, we took a train (KTM)  for 4RM to KL Sentral and on our way to Penang Island for some Adventure! ( I will also write about how you can go from KL to George Town, Penang Island, not a very tiny island but a beautiful place where you can stroll around the old town which promotes Street Art! where you can also find old Mansions and temples, watch out for it! )

Quick Guide on how to go to Penang from Kuala Lumpur, Malaysia – https://talkaboutbeauty.wordpress.com/2014/06/16/quick-guide-on-how-to-go-from-kuala-lumpur-to-penang-island/

How about yours? Have you been to Kuala Lumpur? What’s the best thing you have experienced during your visit? I would love to know! 🙂

← Container Hotel (Kuala Lumpur, Malaysia)
A “BIG THANK YOU” and Any suggestions of Hotel/Hostel to Review in Bali? →

Over to you! Your thoughts? Cancel reply